So I’ve been knitting for exactly two years to the day today!  I had actually forgotten that until I just started typing.  I had known all along that today I was going to write a post regarding the above title, but as I started to type up the pre-amble, I realized it’s my two year knitting anniversary.  What a fortuitous day to write this post then!  Ahem… sorry… 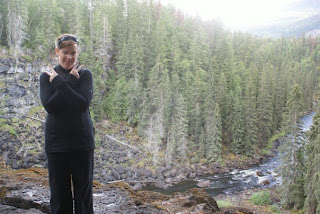 Okay, so I’ve been knitting for exactly two years to the day today.  I originally started knitting because Pat and I wandered into Urban Yarns in Point Gray one late Wednesday evening (when that was their late night) and I figured that I couldn’t buy and keep yarn if I didn’t know what to do with it.  But I really wanted the yarn because damn, it was all so pretty!  I signed up for a class, took one more class (that I sort of didn’t need, but I liked the people in my class) and then it was off to the races.  I never looked back… I learned what I didn’t know how to do off Youtube, found a knitting group to hang with, first on Thursdays and now on Mondays and have had knitting in my hands almost every day since.  I make scarves and shawls (oh, so many shawls!) and hats and mitts (not so much with the mitts… two pairs in two years, only one for me).  I love lace knitting… mostly because it looks so complicated once it’s blocked and finished, but really, it’s just one stitch after the next.   My taste in yarn has changed in two years… I stocked up my stash with wild colored sock yarns to begin with… one skein at a time… now I hardly ever knit with varigated yarn and I sure don’t like superwash… my tastes have evolved in pattern and in yarn and I think, even in two years, I’ve become a knitter with fine taste!
But even with all that… my love of knitting… my big blanket that will eventually be done and gorgeous… all my gorgeous lace shawls and my own hat designs… what’s could be missing??  A sweater.  Well, a Cardigan to be more specific.

Why don’t I knit sweaters?  It can’t be the work because I’ve knit stoles and blankets that have more yardage and complexity than a simple sweater.  I have the endurance and the ability to knit large projects… I can read charts and complex patterns and almost always come out on top the first time around.  I know how to swatch (even tho I mostly don’t, since shawls don’t care about your gauge).  What’s the hangup then to knitting up a simple cardi?  Well, my brain and my emotions mostly.
At first I thought that I’d learn how to knit and then when I lost a few (lot) of pounds, I’d knit a sweater… after all, a sweater for a smaller person means less yarn, less expense, less knitting time.  A sweater for a smaller person would be easier… Plus, if I lost those pounds, then I’d deserve a nice sweater… a nice hand knit by me sweater.  The problem is that even when I WAS the size that I would now consider knitting a sweater for, I didn’t deserve it then either.  I mean, in all fairness, I deserve to have whatever I want… but we’re talking emotionally deserving here… it’s not logical at all! 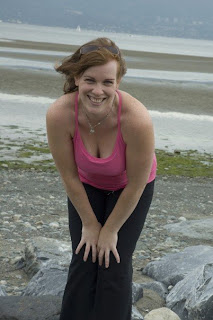 Let’s back up… My story in one line is this:  I weighed a lot… I went to the gym every day and ate properly for 9 months and lost 80 pounds.  I then experienced an incredibly traumatic event and proceeded, almost without noticing, to gain it all back.  In May of 2006 I joined a bootcamp, went every day at 530am for 18 months and was as thin as I’ve ever been.  Strong, healthy and in retrospect a pretty awesome body.  Bootcamp left town and life happened and now I’m right back (not quite, but almost) where I started.  But it’s the end of bootcamp and my bangin’ body that I want to focus on right now… because I felt the same way about it then that I do about it’s different look now.  I felt that my arms were fat, that my quads were huge (well they were… all muscle, but that doesn’t make you feel better when you’re trying to get a pair of jeans on)… that my stomach wasn’t as flat as it should be (all these pictures are of me then…)  If I’d seen someone with my body then (or now!), I’d notice their gorgeous hair, their electric blue eyes… their winning smile and that gorgeous hand knit sweater they’re wearing.  I’d be proud of them for knitting it and proud of them for knowing that they deserved it.
I think we’re harder on ourselves by about a billionty than we are on others.  I didn’t have fat arms then… I had strong muscular quads and a flat stomach… I had a winning smile and electric blue eyes and freckles everywhere from how much time I spent outside (man, those 530am runs along the beach were the bomb!)  But inside my head, I was fat and ugly and had I been a knitter then, wouldn’t have knit myself a sweater either. 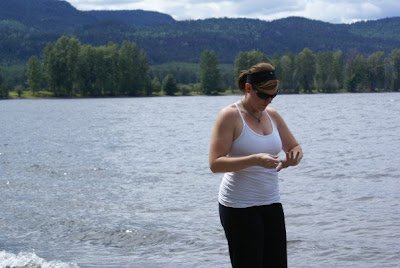 So if I’ve been the size my fantasy sweater body is and didn’t think I deserved it then, I’m sort of screwed, aren’t I… if I want a sweater that is… which I do!  The funny thing is that if any of my friends or aquaintences told me this story, I’d sit them down and tell them how beautiful they are and that you can’t live life for the what ifs… what if I lost 50lbs… what if I waited until I was married… what if… what if… what if… half the time we never realize we’ve reached the ‘what if’ until it’s well happened… and then that ship has sailed right??
I think I’m going to start looking for yarn to knit my Central Park Hoodie….

2 thoughts on “Body Image… wrapped in a sweater…”